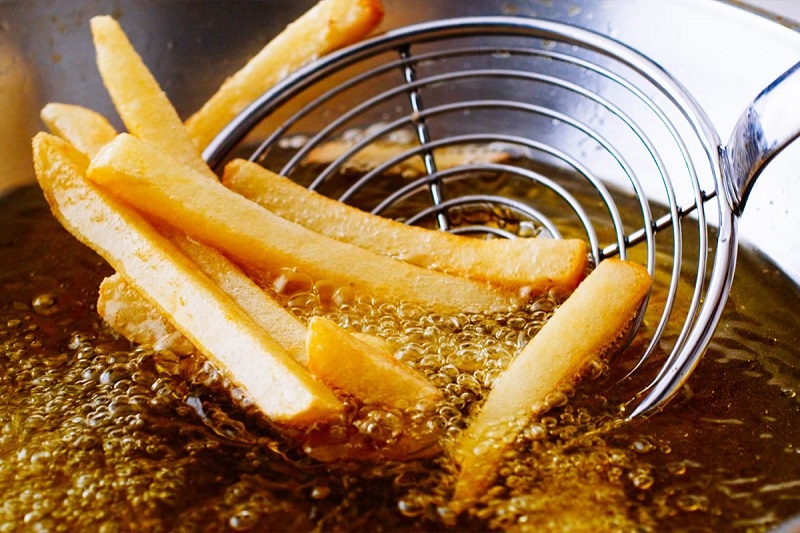 21 Mar What oil is better for frying food?

Although it is not the healthiest option when cooking food, there are people who are simply passionate about fried foods, since they have a crunchy texture and a somewhat different flavor, as well as having a characteristic golden appearance.

However, many home cooks (even the most experienced ones) often tend to make the mistake of using the wrong cooking oil when frying food at home.

And the result can end up being more than catastrophic: burned food or with a bad taste, while it is possible that the kitchen ends up full of smoke, something that will depend especially on the type of oil used.

The truth is that unlike other forms of cooking, such as sautéing, baking, or even preparing dressings For salads, in which we can use almost any vegetable oil we want, frying food requires and presents a series of unique challenges.

It is advisable to know the basic temperature at which we should fry most foods. Which happens to be between 170 to 190 ºC approximately.

For example, this is the ideal temperature at which breaded or battered foods become crisp and golden. Through a process known as caramelization. Which causes the carbohydrates, like starches and sugars. To acquire a brown hue when they are heated to temperatures around 160 ºC.

Therefore, cooking oil for frying should have a smoke point of at least 190 ºC. This leads to the following basic advice: the importance of knowing the smoke points of cooking oils.

One of the main problems has to do with choosing oil for frying with a suitable smoke point since different cooking oils and fats themselves tend to react differently to heat. However, in general, the higher the temperature, the more it will decompose, eventually starting to smoke.

This basically means that certain oils are better for frying foods than others. Thus, the temperature at which a given oil begins to smoke is known as the smoke point. So a high smoke point means that oil can be heated to a relatively higher temperature, especially before it starts to smoke.

Although we may think that this is not entirely important. We must know that when we cook with oil heated beyond its smoke point. It will end up providing a burnt flavor to the food. And it could be dangerous since the risk of suffering a fire increases considerably.

So what would be the best oil?

In reality, we would not be faced with only one type of oil, since there are different options that perfectly meet some of the parameters that could help us when choosing a suitable option to fry our food: smoke point, good flavor, and, above all, which option would be the healthiest.

For example, a published study in the year 2018 found that both extra virgin olive oil As the coconut oil were two of the most stable oils when they were used to fry food.

Of course, the degree of the healthiness of certain vegetable oil has to do with its proportion of polyunsaturated fats, usually known under the name of good fats, and which help to increase HDL cholesterol and reduce LDL, with a low level of fats saturated. And this is what happens, for example, with canola oil. Which also has a smoke point of between 218 to 246 ºC, which is quite high.

In the case of olive oil, for example, it provides healthy fatty acids and antioxidants. As well as anti-inflammatory qualities, making it a very stable oil when heated to high temperatures.

Although coconut oil has an interesting resistance to oxidation, which would make it one of the most stable options, it contains 92 percent saturated fat, so it is much more suitable to use it in moderation.

Therefore, if you are looking for a type of oil that is healthier. There is no doubt that olive oil becomes the best option. Although it has a slightly lower smoke point (190 ºC). Theavocado oilon the other hand also exhibits similar stability.

Although it is also true that we must not forget another important detail: the flavor of the oil. In the case of olive oil, for example, it is very likely that you already know that it is a very characteristic flavor, which usually remains in fried foods. If you don’t like it that much, sunflower oil tends to have a much more neutral flavor.